Business Safety Compliance Made Simple.
For the Best Service and Prices in London.

We have No Hidden extras Like Parking Congestion charges or ULEZ, all included in our prices. 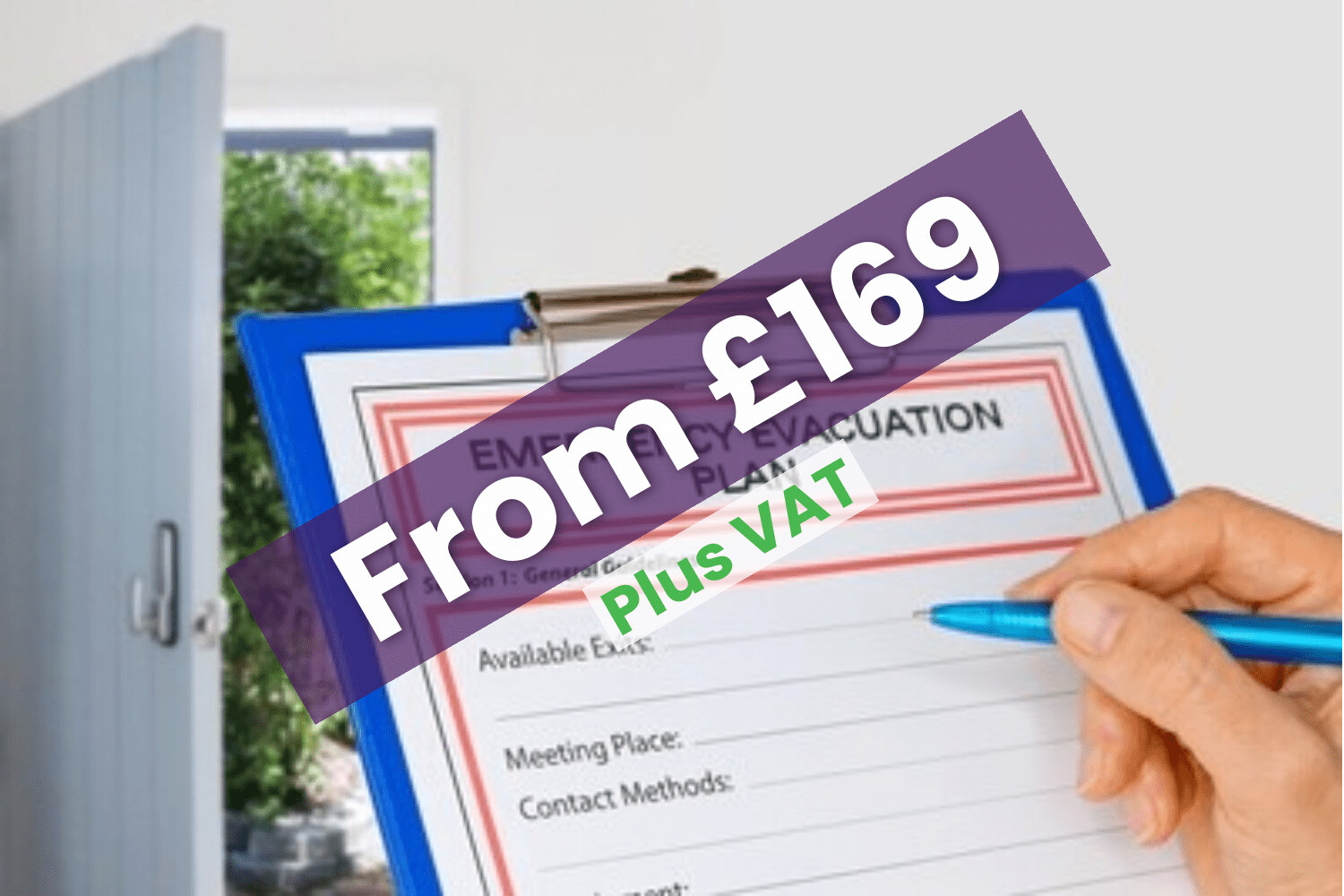 We have multi service engineers - surveyors to save you multiple service visits. we have everything covered under one order.

A London evacuation plan also known as (FEEP) is a exit plan with written document which includes the action to be taken by all staff in the event of fire and the arrangements for calling the fire brigade.

General Fire Notice For London small business properties, this could take the form of a simple fire action sign posted in positions in your communal areas where staff and relevant persons can read it and become familiar with its contents.

Staff Fire Notice for High fire risks or large properties in London will need more detailed emergency evacuation plan which takes account of the findings of the Fire risk assessment, where the staff could be at significantly higher risk in their location. In addition, notices giving clear
instructions of the routine to be followed in case of fire.

In certain cases, you should nominate persons to implement the fire action plan and give them adequate training in firefighting and evacuation procedures. The following items should be considered where appropriate for your London business.

You need to consider how you will arrange the evacuation of the premises if there was a fire your risk assessment and the other fire precautions you have put in place.

In most premises, the evacuation if there was a fire will simply be by means of everyone reacting to the warning signal given when a fire is discovered, then making their way, by the means of escape as plans and shown to get people out of the building to a place of safety.
This is known as a simultaneous evacuation and will normally be initiated by the sounding of the alarm over the fire warning system.

In some larger complex or high rise properties, the emergency arrangements are designed to allow people who are not at immediate risk from a fire to delay starting their evacuation.

It may be appropriate to start the evacuation by initially evacuating only the area closest to the fire and warning other people to stand by. This is normally done by immediately evacuating the floor where the fire is located and the floor above. The other floors are then evacuated one by one to avoid congestion on the escape routes. The rest of the people are then evacuated if it is necessary to do so. The fire warning system should be able to give two distinctly different signals (warning and evacuation) or give appropriate voice messages.

Horizontal phased evacuation in hospitals and care homes: the floor maybe divided into a number of fire resisting compartments and the occupants are moved from the compartment involved in fire to the adjacent compartment and if required to move again.

Depending onto the fire situation it may eventually be necessary to consider vertical evacuation. Because of the extra time this type of evacuation takes, other fire precautions maybe be required as below.

In some instances it may not be appropriate for a general alarm to start immediate evacuation of London Cinemas and Theatres. This could be because of the number of people present and the need for the staff to put per-arranged plans in place first for the safe evacuation of the premises into action.

In such circumstances a staff alarm can be given by fire records, personal pagers, discreet sounders, or a coded phrase on a public address system etc. Following the staff alarm, a more general alarm signal can be given, and a simultaneous or phased evacuation started. The general alarm may be activated automatically if manual initiation has not taken place within a per-determined time.

This strategy may be considered in London blocks of flats where each flat is a minimum 60 minute fire resisting compartment. It may also be considered in hospitals or nursing homes where patients are connected to life supporting equipment and cannot be moved.

The concept allows the occupants to stay put and allow the fire service to extinguish the fire. If the fire spreads and it cannot be controlled, then they will initiate a full evacuation. In the case of patients connected to life supporting equipment a decision has to be made which option is the best, stay or move, either way the patient would be at serious risk.

You should only plan to use defend-in-place, phased evacuation schemes or a staff alarm system if you have sought the advice of a competent person and the fire and rescue service.

Action on hearing the fire alarm

On discovering a fire, it is the duty of every person to sound the nearest fire alarm immediately. The plan should include the method of raising the alarm in the case of fire.

The plan should instruct all personnel upon hearing the fire alarm to act in accordance with the agreed FEEP strategy and if a fire warden’s scheme is in force, they, on hearing the alarm, should proceed to pre-determined positions to assist members of the public and staff
to leave the building by the nearest safe route.

Lifts and escalators should not be used due to possible electrical failure unless they are part of a Personal Emergency Evacuation Plan.
Personnel should not re-enter the building except for the Fire Team.

The Fire Service should also be informed immediately, either by switchboard operator or person discovering fire, dependent on conditions:

Close Down Procedure – Adopt your own ‘Close Down’ procedure as appropriate
Identification of key escape routes
In premises where members of the public or persons unfamiliar with layout of the premises
are present there should be means available to identify the key escape routes. They could
include schematic drawings and most importantly emergency escape also exit signs.

Certificate return time is between 24 and 48 hrs after site visit. Via email only in pdf format

Save this product for later
Display prices in: GBP

We operate across the whole of North, East, South and West London and cover all of the boroughs within the London regions. Our services are available to clients across London for either commercial, residential or construction purposes.

It's easy to book the service you require.